THE SULTANATE OF OMAN and Pakistan are “strategic partners and neighbors”. The arch of political, parliamentary and military exchanges has been getting momentum since 2017. Oman and Pakistan are natural partners due to geographical proximity and the leadership, Government and the people of Pakistan hold His Majesty Sultan Qaboos bin Said Al-Said and the brotherly people of Oman in high esteem.
Relations between Oman and Pakistan are excellent close, warm, brotherly, cordial and deep. Both countries are members of UN, OIC and NAM. There are over 250,000 Pakistani immigrants resident in Oman. 30 percent of Omanis are of Balochi origin from Pakistan’s Balochistan province, having settled in Oman over a hundred years ago.

The Sultanate of Oman is Pakistan’s closest Arab neighbor too. Oman places heavy emphasis on the values of tolerance, peace and co-existence with other faiths. Oman relationship with Pakistan has been established on a solid foundation originating before contemporary Pakistan.

An introspection of the two countries would highlight strong reasons for further bilateral cooperation in the areas of defense, trade, tourism, human resources, oil gas, ports, industry, CPEC, Infrastructure and foreign policy.
Most recently, both countries have agreed to enhance cooperation in the fields of trade and economy given the geographical closeness of Pakistan and Oman. Oman considers Pakistan a “gateway” for Oman access to the Central Asian States. Being prominent regional expert to Oman/GCC it is strongly recommended that bilateral cooperation can be further strengthened and taken to the new heights by improving economic relations. 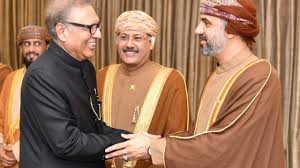 On its part, Pakistan attaches great importance to its relations with Oman and is keen to further enhance these brotherly relations in all spheres. It is hoped that the creation of Pak-Oman Friendship group in the Consultative Assembly (Majlis A’ Shura) of Oman would further connect the two countries. Moreover, regular high-level interactions through established mechanisms of Bilateral Political Consultations and Joint Commission would promote and expand bilateral ties in diverse fields.

However, the current level of bilateral trade is not match with excellent political ties and highlights the need to diversify bilateral trade by taking advantage of geographical proximity, the investment friendly policies of Pakistan, and Pakistan’s potential of exporting food items, construction materials, leather and surgical goods to Oman. Pakistani community has been making valuable contribution to the development of Oman which needs to be increased in employment of Pakistani workers in banking, health, education, petroleum and food sectors.

Further socio-economic integration and regional connectivity of both the countries are also linked with each other. It forms a strong impetus for fostering comprehensive bilateral cooperation between Pakistan and Oman in light of their mutually shared interests. Oman’s special spot in the GCC/MENA in terms of its foreign policy maneuvering, ethnic composition, and proximity with Pakistan are factors that will facilitate the strengthening of relations between Pakistan and Oman. It will also provide Pakistan with a strategic partner in the Gulf.

Pak-Oman Investment Company is the prime example of increasing financial cooperation between the two countries which has been established with $100 million during the visit of Sultan Qaboos. It has a strong focus on infrastructure development and SME financing. It is one of the seven joint venture (JV) development financial institutions which the Government of Pakistan has established with its strategic partners including China, Saudi Arabia, and Brunei, to name a few. Pak-Oman is one of the most profitable such JV for the last many years. The assets of the company have now increased up to $600 million. Both Pakistan and Oman offer immense potential for economic growth, as well as social development and can leverage on each other’s expertise in various sectors.

Pak Oman Microfinance Bank Limited has also been established in order to enhance trade between Oman and Pakistan. Both the countries have also agreed that bilateral accords on defence cooperation, business sectors, labour and manpower which are in their final stages needed to be brought to fruition.

Pakistan and Oman desires to boost bilateral ties in petroleum sector. The delegation from Oman showed the desire of expanding ties with Pakistan. The delegation displayed a keen interest in getting engaged with the Petroleum Sector of Pakistan including the signing of a MoU with the Pakistan LNG Limited, surging the gasoline volumes, LPG and petroleum products. The government of Pakistan assured the visiting delegation that all measures would be taken for facilitating the OTI’s activities in the Pakistani market.

The bilateral trade relations between Pakistan and Oman are on the rise. According to Pakistan’s official figures (February 2018), Pakistan exported goods to Oman worth $ 142.3 million which is 67 percent higher than $ 85.2 million worth of exports in 2017. The volume of goods imported from Oman was recorded at $ 234.1 million in 2018 higher by 21.7 percent as compared to $ 192.4 million worth of imports in 2017. The trade balance, which stood at $ 91.8 million, has bettered by 14.9 percent in favor of Pakistan as compared to $ 107.19 million in FY17, yet it needs attention of the govt. authorities as to how Pakistan’s volume of export to Oman could be enhanced. Nonetheless, trade volume has been increasing but there is also a need to enhance the overall trade volume by making joint cooperation in different fields of economy.

For the further strengthening of bilateral trade and business activities between both the countries, a joint business council of Chambers of Commerce of Pakistan and Oman is going to set up in Oman. Oman can add to further economic cooperation with Pakistan by virtue of investments as vast prospects of investment lies in industry, livestock, energy, agriculture, information technology. Moreover, Pakistan can tremendously benefit from Oman’s technological advancement in the oil & gas sector.

Pakistan is constantly updating its infrastructure to increase LNG imports from Oman to alleviate its energy shortage. The value of Pakistan’s exports to Oman stands at approximately USD $118 million, well below to its potential. The poultry industry, for instance, is a niche that Pakistan could foster with Oman. Presently, Oman imports around 57.5 percent of its poultry, while Pakistan produces a poultry surplus. Likewise, Oman could export energy resources to Pakistan. Thus, Oman could be a potential source of uncharted economic possibilities, representative of other unexplored areas of cooperation in Pakistan-Middle East economic relations.

Frequent meaningful exchange of Chambers of Commerce, businessmen and investors is the need of the hour. Social sector of both the countries offer a befitting proposition which may lead to immense socio-economic prosperity of the both the countries in the days to come. Rapidly changing geo-political and geo-strategic emerging trends require further better political understanding and consultative mechanism between the two countries and HIS MAJESTY SULTAN QABOOS BIN SAID AL-SAID is “economic guru” and “political magician”.