The United Arab Emirates (UAE) is the center of “human fraternity”. UAE is the pioneer of human diversity and dignity. It has already dubbed 2019 as the “year of tolerance”. 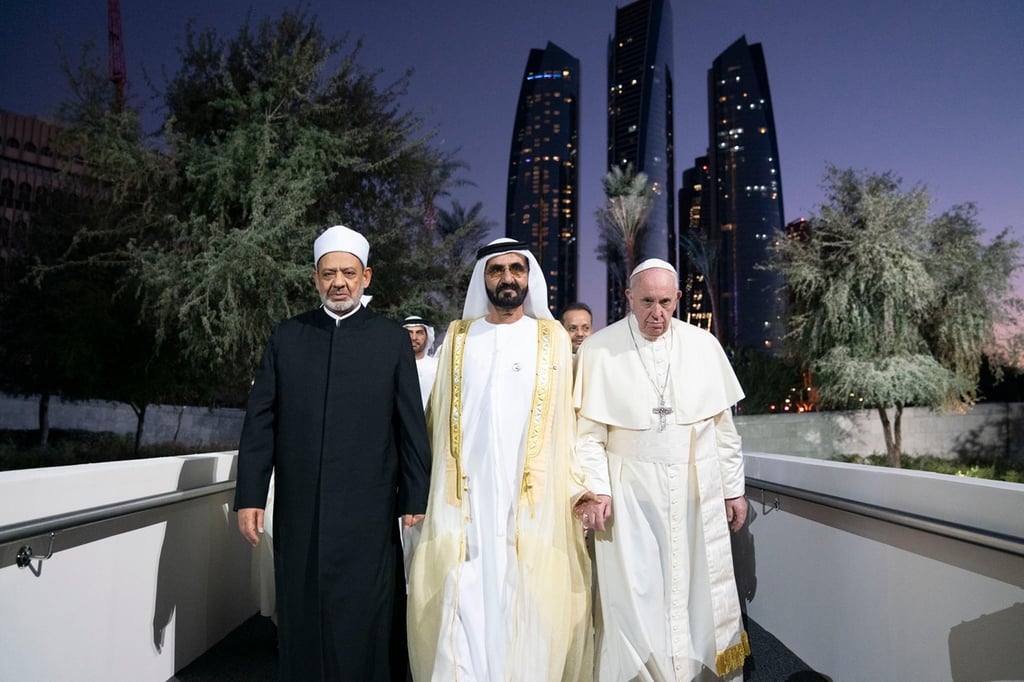 To celebrate the true essence of human tolerance and further strengthening of interfaith harmony, the leadership of the UAE invited Pope Francis who has subsequently, visited the said country.

It was first-ever papal visit to the Arabian Peninsula the birthplace of Islam. During his historic visit, he met with Emirati leaders and signed a document promoting “human fraternity” with Sheikh Dr. Ahmed El-Tayeb, the Grand Imam of Al Azhar. It called for “freedom of belief”, the “promotion of a culture of tolerance”, the “protection of places of worship” and “full citizenship” rights for minorities.

Afterwards, both laid the cornerstones for a new church and mosque to be built side-by-side in Abu Dhabi. The meeting was sponsored by the Abu Dhabi based international Muslim Council of Elders.

During his visit Pope Francis while addressing the interfaith meeting he denounced the use of armed power in Yemen, Syria, Iraq, Syria and other Middle East wars. He stressed the need to have peace by telling Christians and Muslims that conflicts brought nothing but misery and death. During an inter-religious meeting at the UAE Founder’s Memorial he hoped that his trip to UAE would foster peace through religious dialogue.

Pope Francis delivered a keynote speech to an interfaith gathering in the United Arab Emirates during which he warned that the future of humanity was at stake unless religions come together to resist the “logic of armed power … the arming of borders, the raising of walls.” He also projected the value of global tolerance and interfaith harmony having which future of mankind would be secured.

Pope Francis also urged religious leaders to work together to reject the “miserable crudeness” of war with a strong denunciation of violence committed in God’s name. 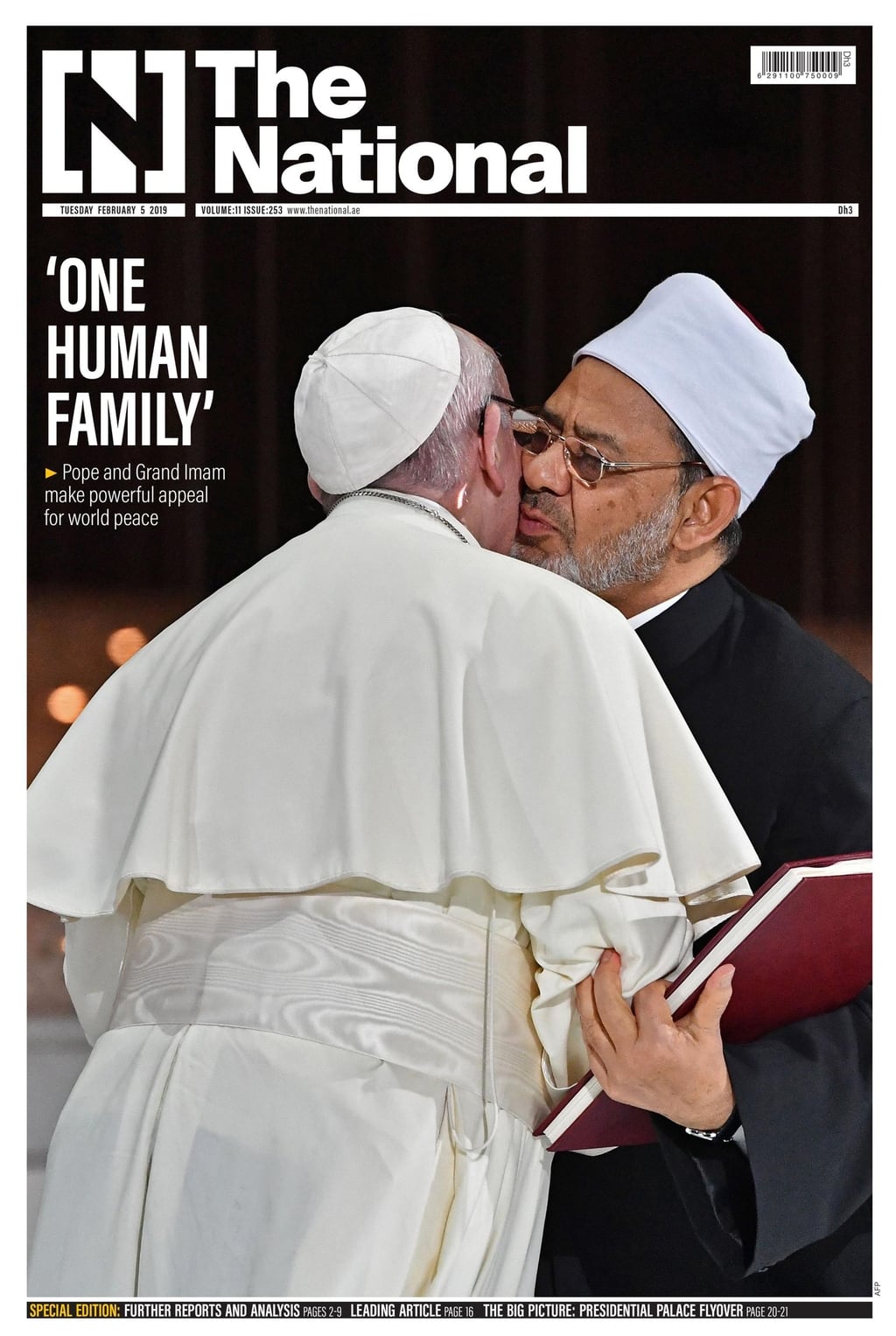 On his part, the grand Imam, Sheikh Tayeb the most senior Muslim figure called on Muslims in the Middle East to “embrace” local Christian communities, describing them as part of the nation and not a minority. He also called on Muslims in the West to integrate in their host nations and respect local laws. He insisted to the audience that Islam is a religion of peace that values human life.

“All religions are innocent and free from terrorism and armed groups, no matter what religion or notion those groups follow, who their victims are, or what land their crimes were committed on”.

Pope visited Presidential Palace for private talks with Abu Dhabi’s Crown Prince Sheikh Mohammed bin Zayed al-Nahyan and other UAE leaders.
UAE stands for interfaith harmony and tolerance due to which priests and diplomats describe the UAE as one of the least restrictive environments in the Middle East for Christian worship, which is allowed in church compounds with special licenses. The UAE hosts nine Catholic churches and is home to about one million expatriate Catholics, many from the Philippines. 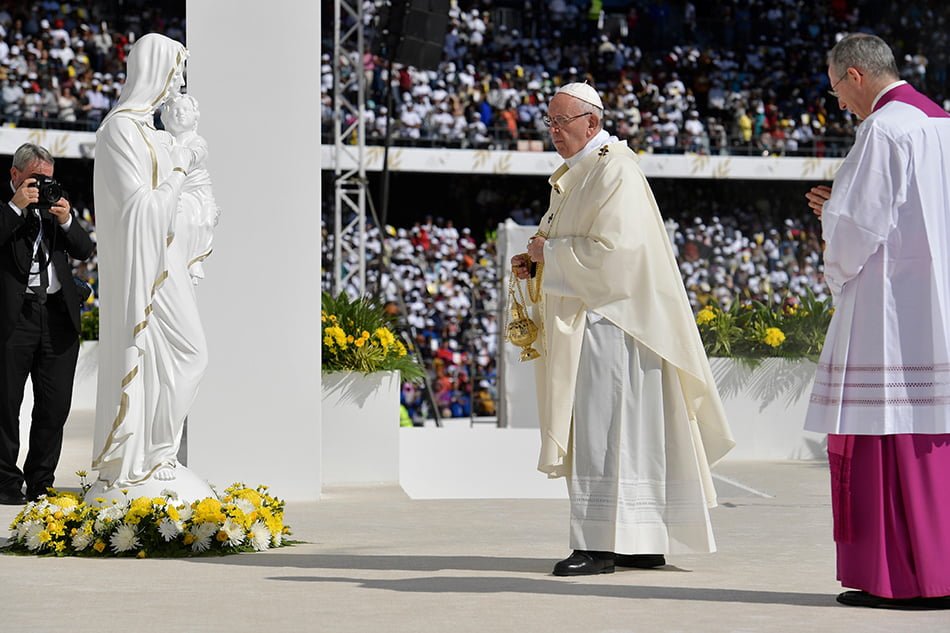 The pope waved at an enthusiastic crowd carrying Vatican flags and banners as he drove into Zayed Sports City Stadium, where an altar with a large cross was set up for the unprecedented open-air service in a country where worship is normally allowed only inside churches.

During his inspirational speech he overturned popular thinking according to which it’s the rich and powerful that are blessed. For Jesus, he said, it’s instead the poor, the meek, those who remain just at the cost of appearing in a bad light, and those who are persecuted who are actually blessed.

“Let us look at how Jesus lived: poor in respect to things, but wealthy in love; he healed so many lives, but did not spare his own,” the pope said.

He came to serve and not to be served; he taught us that greatness is not found in having but rather in giving. Just and meek, he did not offer resistance, but allowed himself to be condemned unjustly. In this way Jesus brought God’s love into the world. Only in this way did he defeat death, sin, fear and even worldliness: Only by the power of divine love,” he said.
Pope Francis’ trip has been warmly welcomed by all the Catholics among the UAE’s huge migrant workforce.

According to Anwar Gargash, Minister of State for Foreign Affairs, the papal visit to the UAE adds a new page in the country’s history of tolerance, carrying a “great humanitarian worth.

The visit affirms to the world the UAE’s approach to tolerance and peaceful coexistence, the founding principles of the UAE since the founding of the union, guided by the legacy of late founder Sheikh Zayed,” Gargash said on Twitter.

Opening the “Global Conference of Human Fraternity,” attended by some 700 people from around the world and concluding with an interreligious meeting headed by the pontiff and the imam, UAE’s Minister of Tolerance, Sheikh Nahyan bin Mubarak, urged the world to join together in tolerance and fraternity to achieve peace and reduce political conflict.

“We live in difficult times with new and unforeseen challenges confronting local communities,” said Sheikh Nahyan. He said the UAE was honored by the visit of the Pope and Grand Imam, and that both are global figures for compassion.

Francis’ visited 800 years after his peace-loving namesake St. Francis of Assisi visited an Egyptian sultan, marked the culmination of years of Holy See efforts to improve relations with the Muslim world after they hit a low during the papacy of Pope Benedict XVI.

UAE is a tolerant country and champion of human fraternity possess the power to deal with the challenges of 21th century. Its spirits of tolerance and care of human fraternity will recognise the moral imperative for improving the health and safety of all individuals. It will enable cooperation, understanding, and mutual respect among different groups and cultures. It will also care about important environmental issues.

Being a prominent regional expert on UAE & GCC I am of the opinion that this visit of Pope Francis will bring multiplier effects to UAE. It will definitely further enhance its soft image in the world especially to European Countries. It will reaffirm its commitment towards religious freedom, human rights and equality. It will project its commitments towards achieving a safer world, height of multiculturalism and the last but not the least, peaceful co-existence.

UAE has become brand ambassador of human fraternity in the world where more than 200 different nationalities live, work and enjoy together. It has become champion/leader of humanitarian assistance in the world.
UAE is the real hope of all the struggling people around the globe which has the vision and capacity to “turn tears into smiles” and “crises into opportunities”. The just concluded historic visit of Pope Francis has again endorsed UAE’s policies of tolerance, anti-discrimination, human rights and above all sharing and caring of pure and simple humanity. Undoubtedly, UAE is the “cradle of humanity” where human diversity is treated as asset not threat, where multiculturalism is termed as effective means of human survival not human marginalization.