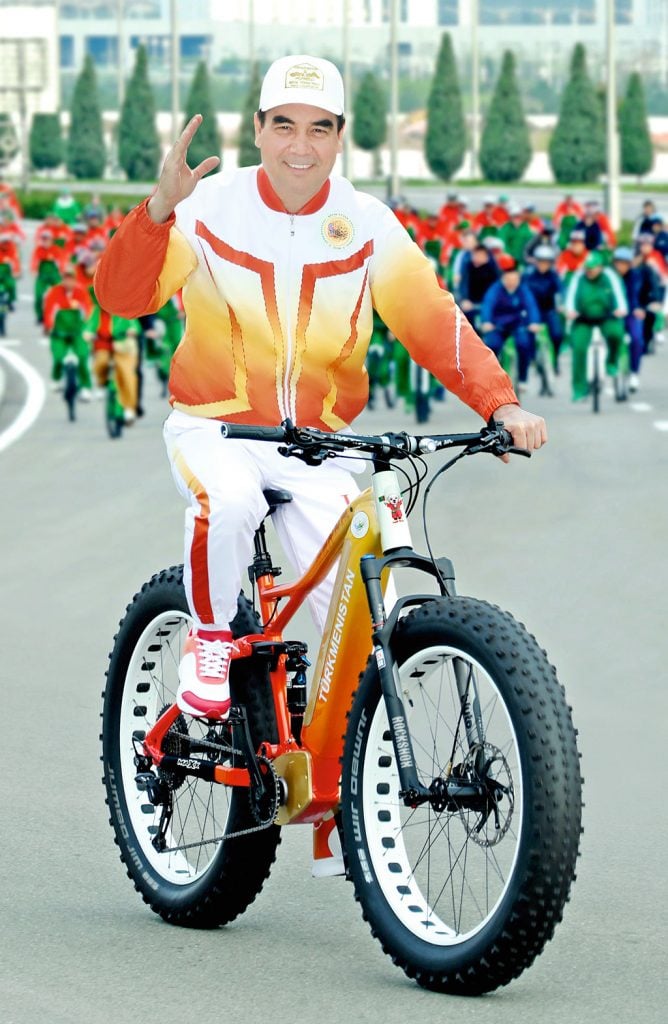 Turkmenistan’s President H.E. Gurbanguly Berdimuhamedov has great vision for the promotion of sports. Most recently, the United Nations in its 82nd meeting unanimously adopted his initiative in Resolution 72/272, which declares 3rd June of each year as the “World Bicycle Day”. It noted the importance of sport as a factor in ensuring sustainable development, and reaffirmed Turkmenistan’s commitment to strengthen international cooperation aimed at implementing the principles of development and peace. For its part, Turkmenistan hosted a cycling event in early April 2018 in Ashgabat.

World Bicycle Day will allow the global cycling community to raise awareness about the importance of cycling for all and in everyday ways all over the world. The primary purpose of establishing the Day was to celebrate on an annual basis the bicycle, which had been in use for two centuries.

Among the secondary goals was the global unification of the bicycle enthusiasts’ efforts to present the cycling’s role as a solution to worldwide challenges, including transportation, pollution, climate change, poverty, health and quality education. With many noteworthy days of recognition celebrated by the United Nations, the bicycle as a loyal instrument of humankind deserves a day of recognition too.

During the years of Independence, modern sports facilities state-of-the-art stadiums, equestrian centers, sports academies were built in all regions of the country. Conditions were created to train our athletes and ensure their participation in different levels of games and international tournaments.

Much attention is also given to the development of cycling. Holding annual massive bicycle rides has become a good tradition in our country. Earlier this year we launched the Amul-Hazar 2018 international bicycle marathon.

The range of activities and development of the sports movement in the country encourage our people to engage in sports. Improving public health, developing sports and massive physical training are of crucial importance.
This is also confirmed by the decision adopted by the United Nations General Assembly declaring 3 June as World Bicycle Day based on our country’s initiative. This document that will further raise Turkmenistan’s international profile was co-sponsored by 56 countries of the world. And we are entitled to take pride in this.

The World Cycling Alliance (WCA) and the European Cyclists’ Federation (ECF) welcome this resolution adopted by the UNGA. WCA and ECF Secretary General Dr. Bernhard Ensink states “Cycling is a source for social, economic and environmental benefits – and it is bringing people together. WCA and ECF are extremely happy with this declaration. This UN declaration is an acknowledgment of the contribution of cycling to the Sustainable Development Goals (SDGs), in which it is shown that cycling, delivers directly on at least 12 of the 17 SGD’s”.

The wonderful indoor cycle track, built in compliance with the Olympic standards deserves the highest assessment. The erection of this sports facility is a very important step in the development of cycling in Turkmenistan. According to international experts and experts from the International Cycling Union, all necessary requirements are observed there and all necessary infrastructures is created that provides conditions for holding international high-level cycling tournaments in Ashgabat.

The highways running along the Kopetdag Mountains have hosted numerous national cycling competitions for many decades, and in recent years have been the venue for international training camps for leading athletes. This is facilitated not only by the climate of Turkmenistan, which allows cycling in the open air almost all the year round, but also the perfect quality of the highways in the country.

The most important is the special attitude to cycling paid by the President of Turkmenistan, who regularly organizes bike rides and bike parades as well as participates in these events.

Recently, on May 20 2018, mass cycling ride was held in Ashgabat along the highways of Kopetdag Mountains. The participants of the event included representatives of ministries and departments, students, numerous supporters of healthy life style who inspired by personal example of Turkmen leader promote the ideas and beginning of the Head of the State on the development of sport movement in the country.

Number of cycling supporters in Turkmenistan is always growing both among young and elder generation. Citizens of our country learn to ride bicycle with pleasure, having appreciated its advantages for doing sports and health improving rides as well as comfortable and environmentally friendly type of transport.

Having announced the care of health and wealth of the nation, upbringing of physically fit and morally strong generations as the utmost objective of the state importance, President Gurbanguly Berdimuhamedov give organized and targeted character of long-term national strategy to the development of mass physical and health improving movement and sports of highest achievements.